I.1 Overview of Coffee in Hanoi 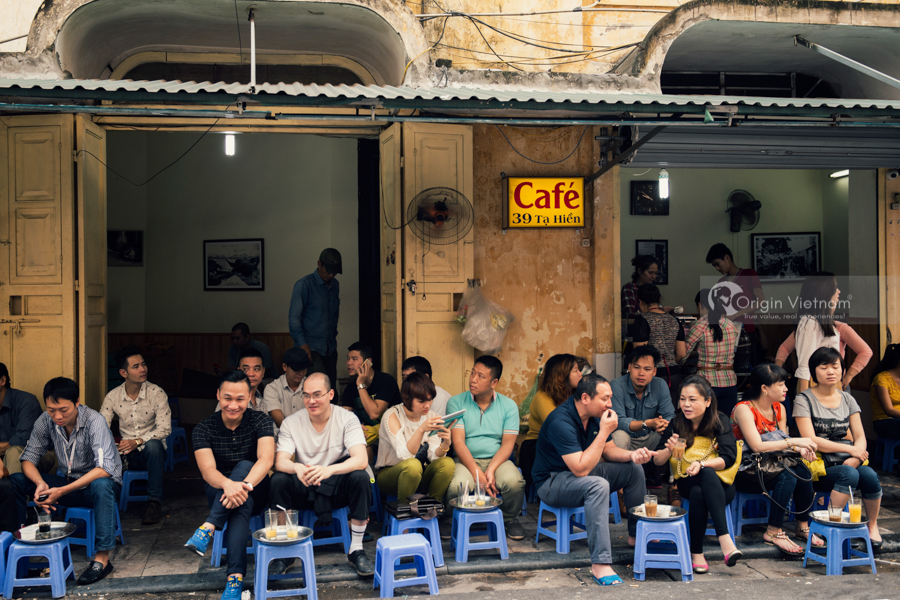 The coffee was first imported to Hanoi by French during their first colonial exploitation here. With the formation of the French Quarter where the French immigrated, they brought their favorite drink, and Hanoi coffee began to take its first steps on the streets around Hoan Kiem Lake.

Following the French invasion at the 1800s, coffee was introduced in Vietnam, but the source of coffee back then was limited therefore it was considered as a luxury good, only the French colonists along with Nguyễn dynasty’s nobles could have the right to drink it.

Few years later, some “pure” Vietnamese coffee shops were opened in the neighborhood. The famous names such as: Giảng, Lâm coffee shops began to change their coffee making recipe in order to satisfy customers. They started to replace the French coffee roasting way by using avocado oil for roasting the coffee, which creates a creamy flavor as well as avoids being over cooked. Moreover, they also used the Arabica way mixed with Robusta or other nuts to make the flavor stronger.

Those coffee shops are always in mind of Hanoians as a coffee lover’s destination no matter how much their changes could be.

Why don’t we go around French Quarter and take a sip of coffee?

It can be said that the story about Hanoi coffee is an unique one. Its own features can make you feel the soul of Hanoi once you taste it.

Compared to the millennial history of this city, Hanoi coffee is just an exotic cultural which has been there for nearly one century.

But with an essence of the city that always refines the identity of one’s own, Hanoi coffee has gradually been replacing the tea in the daily beverage culture, turning the street shops into an interesting corner in all kinds of coffee shops or restaurants. 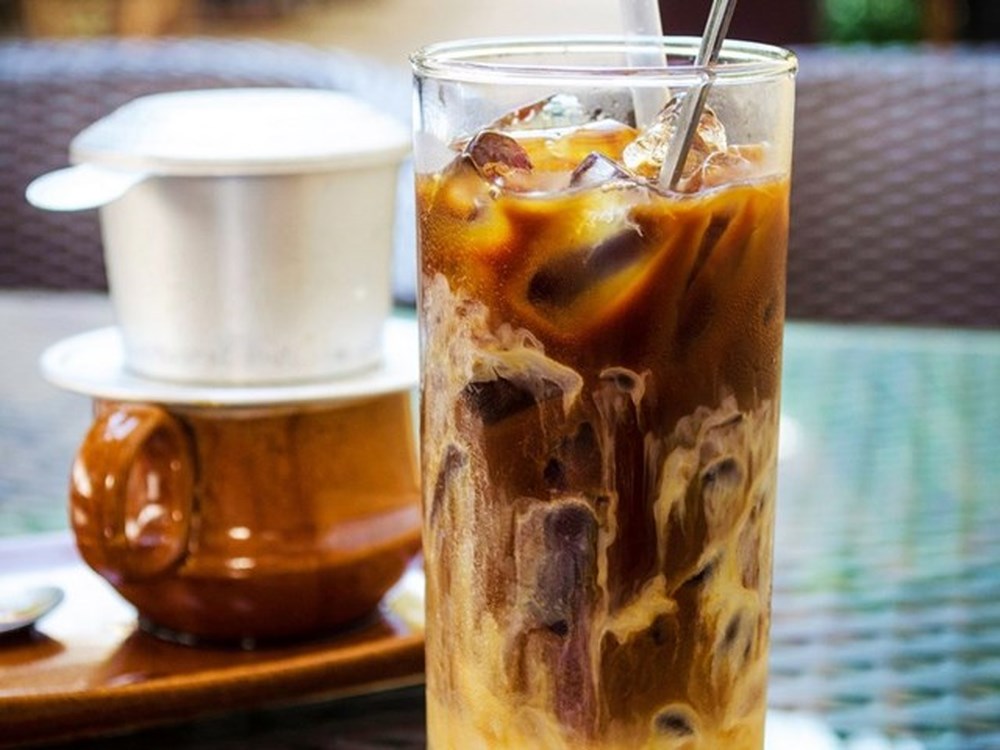 So no matter wherever a Hanoian goes, what that man who grew up in the heart of Hanoi remembers the most is the street stalls, and coffee. The smell of coffee is the compass that leads us to the soul of Hanoi.

There was a saying to praise the most famous brands of coffee shops in the 70s-80s: “Nhân, Lâm, Năng, Giảng”

Old Quarter Coffee in Hàng Hành hides its self like a peaceful corner in the middle of a busy area. The shop is only for patrons, people who love quietness and nostalgic. In the quiet space with ancient houses, parallel sentences, garden, bamboo architecture, some bantam chickens (the smallest chicken) around the yard, the coffee shop makes people feel like time to stop.

Coffee in luxury buildings such as:

Is a meeting place for business people. Customers can enjoy both coffee and the city view here. 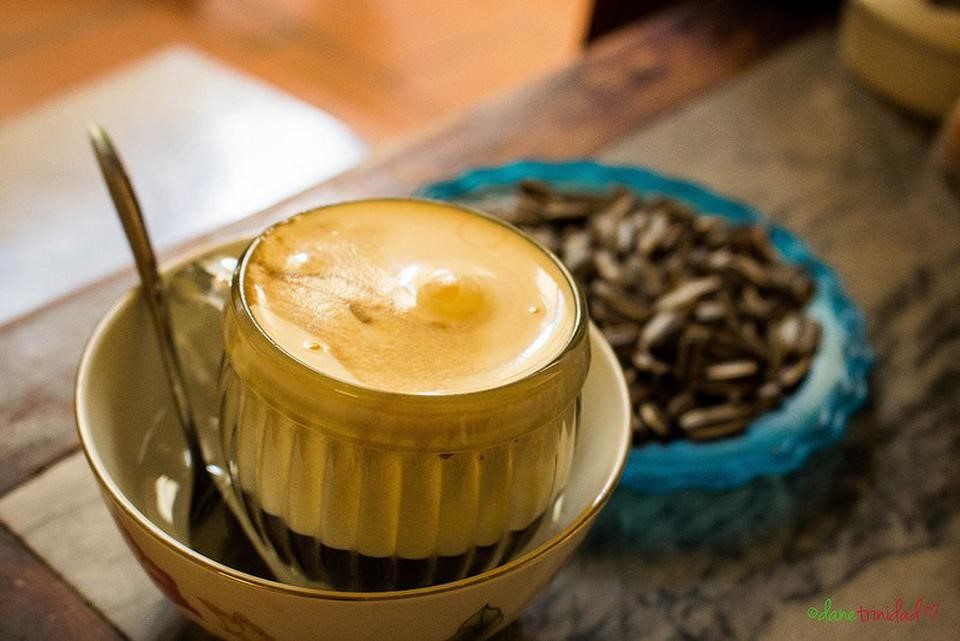 Egg coffee – the creative beverage of Hanoians, has become famous around the world by the foreign guests after passing along the story about that drink. Someone said, only by drinking hot egg coffee in a simple glass cup once can make you hardly forget Hanoi.

The coffee maker must choose fresh raw eggs to not smell fishy. Coffee must also be a purest class of Vietnam, has a passionate aroma. Chicken eggs are chewed with yolks, hand-wiped or hand-woven until it smells like a bun and then poured with hot coffee in the middle of the cup. Eggs then floats on top of the cup.

The way to make egg coffee is not too complicated, but requires a sophistication and skilled hands . The recipe is nothing special but very few places can make this drink. The secret is to reduce the rate of eggs, coffee and milk so that the mouth is just right, harmony is not too sweet, not too bitter, dank in the smell of passion.

The eggy taste mixed with the aroma of Vietnamese coffee creates the flavor of coffee. You should drink as soon as it is still hot, otherwise it will be fishy and difficult to drink. Later on, some restaurants sprinkle over a cup of coffee with a little pinch of brown cocoa powder which make your hot cup both beautiful and have more attractive flavor. Alike any other traditional foods, when drinking, one must slowly stir the bubbly foam, put each spoon to the mouth to feel the creamy taste of egg spreading the rich flavor .

Egg Coffee is considered the heart of Hanoi coffee culture. The first egg coffee in Hanoi appeared in the early twentieth century, the creator of this unique egg coffee is Nguyen Van Giang. At the time, he had worked as a chef at the French five-star Sofitel Legend Metropole so that he was able to transform the familiar Capuccino of the West into egg white with more intimate ingredients. 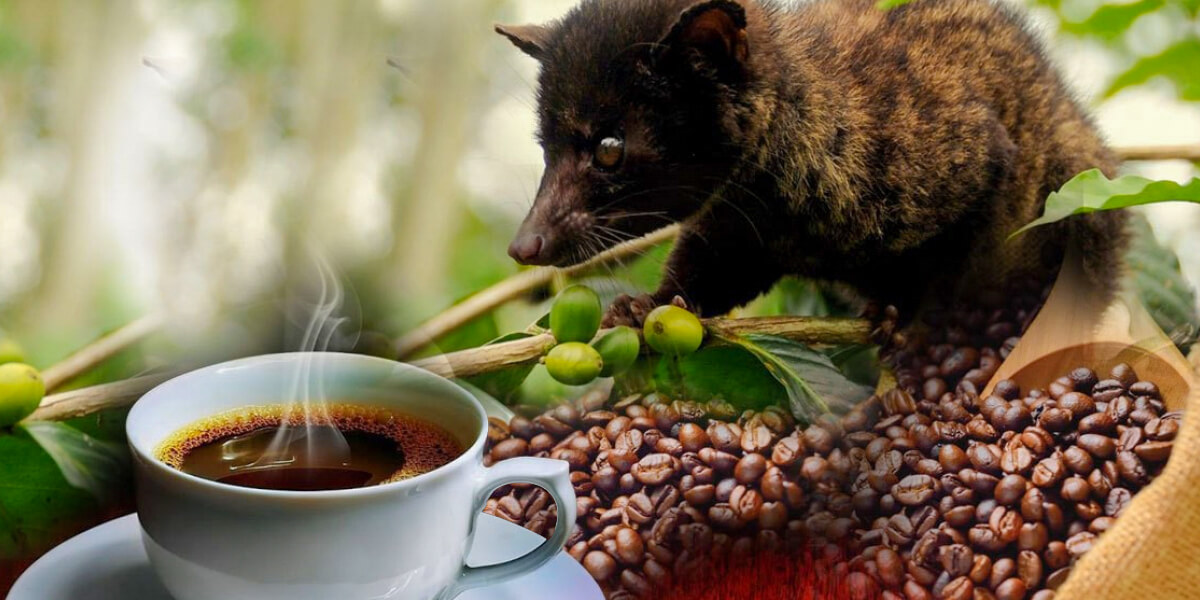 Weasel Coffee – the most expensive coffee in the world (or sometimes called Civet Coffee or Kopi Luwak) has the history from thousand years ago.

Back to time when French took the control of politics in Vietnam, farmers, who were the one making coffee, had no chance to enjoy their work. They were not allowed to taste even 1 drop of what they made.

The only way they can taste coffee was to pick up Weasel poops, which was a block of coffee beans sticking together. They then realized this type of “poop coffee” was way more aromatic than the usual one. With this new type of coffee beans, the coffee taste was smoother and less bitter, much better than what they had to serve for the French.

Weasel coffee once roasted, becomes extremely aromatic with vanilla – smelling, created a smooth and sweet after – taste coffee while the contained caffeine yet lessen but still preserved, therefore the pleasant feelings that people often associate with their first cup of coffee in the morning are not affected. 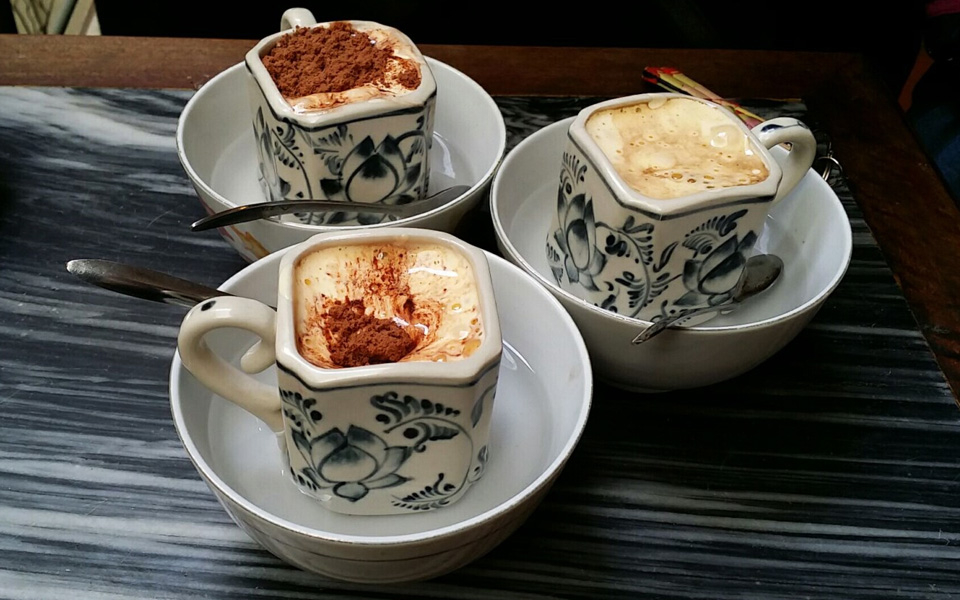 As the very first place in Hanoi having egg coffee, Giảng Café was founded by Mr. Nguyễn Văn Giảng in 1946. Giảng Café is humbly hidden on a small lane on Nguyễn Hữu Huân Street in the city’s old quarter. It may be difficult to find for visitors, but it is well worth the effort. It continues to be hugely popular among Hanoi’s coffee addicts with its special Egg coffee.

Was born and stick with Hanoi since 1946, the brand was opened by 3 ranger soldiers (Thi – Nhân – Thế), then the Nguyễn Văn Thi – Trần Thị Thanh Kỳ family created the recipe and established this coffee brand.

The owner of the cafe has the secret of roasting, grinding their own coffee so that the coffee is always particularly delicious. Until now, each of his children opened their own coffee shop, so you will see a lot of coffee shops named Nhân. But most people still find the one in Hàng Hành street. 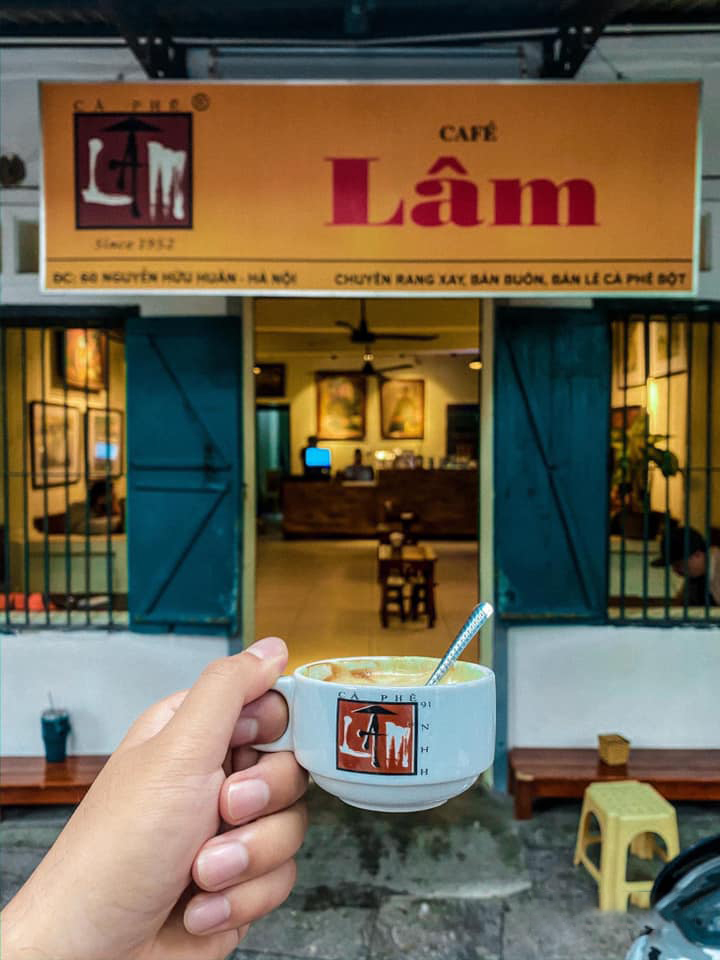 This one of Hanoi’s oldest café. Its proprietor, Mr. Lâm, provided coffee and often loans to the city’s impoverished artist community during the war.  The place is nostalgic and packed with local people. It was an interesting experience to sit at the pavement and watching people passing by. Opposite to Giảng cafe.This place offer traditional Vietnamese coffee 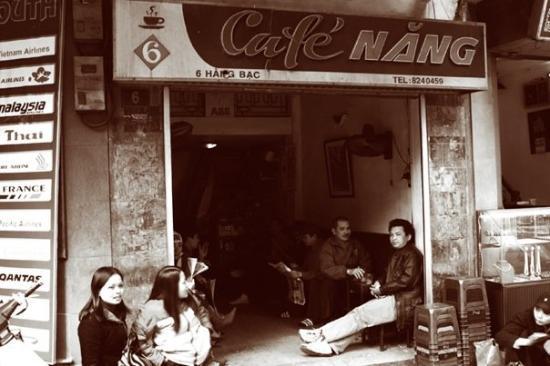 As the oldest café in Hanoi, the Café  has been selling coffee for over 50 years. This was a small address at No.6 Hàng Bạc street where artists of Hanoi gathered. The place is decorated with a folk style always crowded. Its customers are attracted by the taste of coffee. According to the owner, there is no secret in the way of making each cup of coffee but the heart of the seller.

With the growth of outgoing youth communities, many coffee shops have expanded to many branches in the city, covering many provinces in the country. To survive for a long time, these shops must still retain its own identity, not mixed up the cafe market that is already very saturated.

These following coffee shops are best suitable for people who are looking a space to work and to have meetings with friends.

Highlands Coffee is a Vietnamese coffee shop chain and producer and distributor of coffee products, established in Hanoi by Vietnamese American David Thai in 1998. The chain of coffee shops located in beautiful locations in the city which is convenient for having business meetings or small group discussions. Here they use the self-service at the counter. 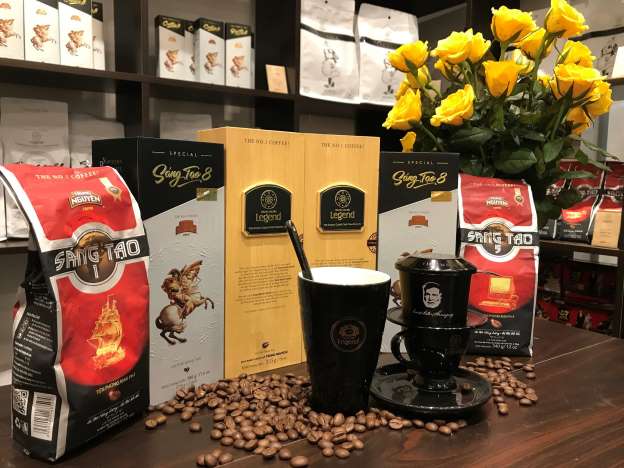 Although the brand is said to have a lot of scandals surrounding the spokesperson, brand positioning, image identity, the Trung Nguyên chain is still one of the top choices for ones who love the “real coffee”.

If you are familiar with Trung Nguyên, you will find it very difficult to drink coffee at street stalls, you will immediately notice the difference in the taste of coffee mixed with many additives. 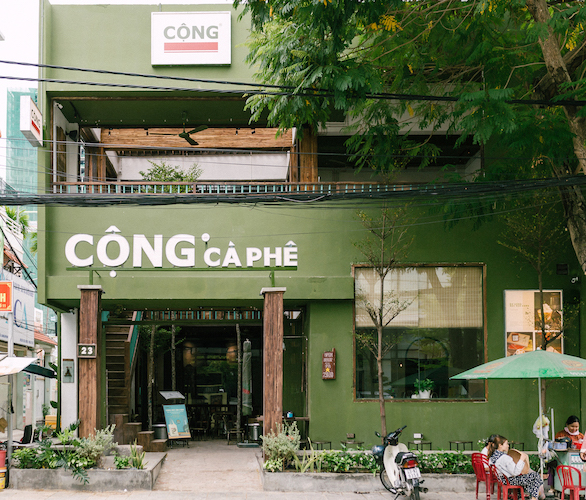 Cộng Caphe is a popular coffee chain that has taken Hanoi with its rustic, military chic decoration.

In the city, there are 18 outlets in most crowded locations.

Here, crowd avoiders can always find the hidden corner for themselves, or those who like noisy places can chat with friends on the balcony. It’s worth checking out at least one Cộng Ca phe branch. 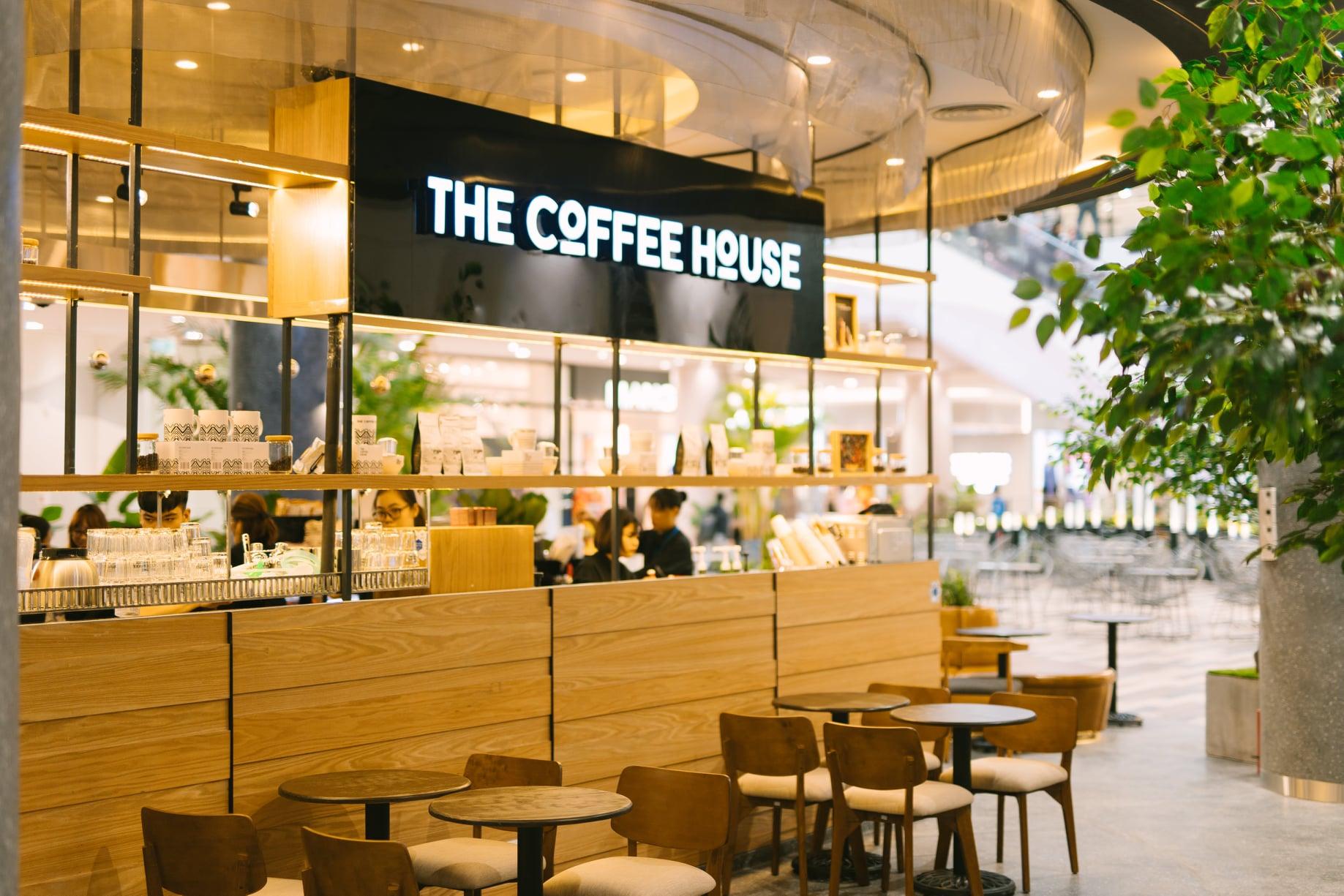 This coffee chain was first opened in Ho Chi Minh city and up to now, it has covered hot spots in this city. In 2015, The Coffee House appeared in Hanoi and quickly expanded its branches.

Their target customers are students, office workers who need quite space for studying, working and partner meetings.The main style of The Coffee House is the simplicity and maximum use of light in the balcony, windows, and the placement of many green spaces. Starting from a small café on the street that is also very modest in Hanoi – Nguyễn Thiệp, no one did expect that the coffee shop later grows that fast. Up to now, Aroi has 7 facilities in Hanoi. Not being invested so much but by catching the right opportunity when the wave of Thai snacks spilled into Vietnam, the chain has quickly gained its ranking.

III. Take a sip of Coffee while taking a tour in Hanoi

Completely different from take-away coffee, traditional coffee in Hanoi makes people live slower to taste the bitterness in the tip of tounge, but sweetness later.

Tasting a cup of Hanoi coffee is just like to live a life. Every one tries their best in work when they are young to get all the deserved achievements when they are mature.

Taking a Hanoi tour around city, you have a chance to pass by those traditional coffee shops. The smell of coffee beans flies in the air and lightly touch your nose.

You might not help but falling in love with a beauty of Hanoi – traditional coffee.

Don’t hesitate to ask the guide for a stop at coffee shop to live slowly, and to share with each other your life and your experience.