1. The origin of using ghost money:

Vietnamese spiritual life involves our belief on ghost and life in another world for dead people. The use of Ghost money or Spirit money is deeply rooted in Asian culture.

1.1 The definition of ghost money:

Ghost money (joss paper) traditionally made from bamboo, emits large quantities of carcinogenic chemicals such as polycyclic aromatic hydrocarbons, carbonyls and benzene. Contemporary forms of joss money are rather different; they look more like the money from current times. Westernized varieties include copies of Bank notes (Chinese Yuan, Thai Baht, Vietnamese Dong, or even the US Dollar, cheques and paper credit cards. Some people even go as far as offering papier-mâché houses, cars, toilets, servants, passports, flight tickets, rice cookers and even flat-screen TVs. The bank notes are specifically meant for dead ancestors to give as a tribute to the God of Death for a short stay or to escape punishment. The bank note copies are often of outrageous denominations – they can range anywhere between $10,000 and $500,000. These notes carry an image of the ‘Bank of Hell’ on the back. ‘Hell’ in itself is not viewed as a place of torture, but a more neutral realm.

1.2 The belief of ghost money among the Vietnamese:

Burning ghost money and votive paper such as clothes, shoes, hats, toiletries and toys are popular among the Vietnamese. Exceptions to this tradition are Roman Catholics, Protestants and followers of other religions who account for less than 10% of the population. 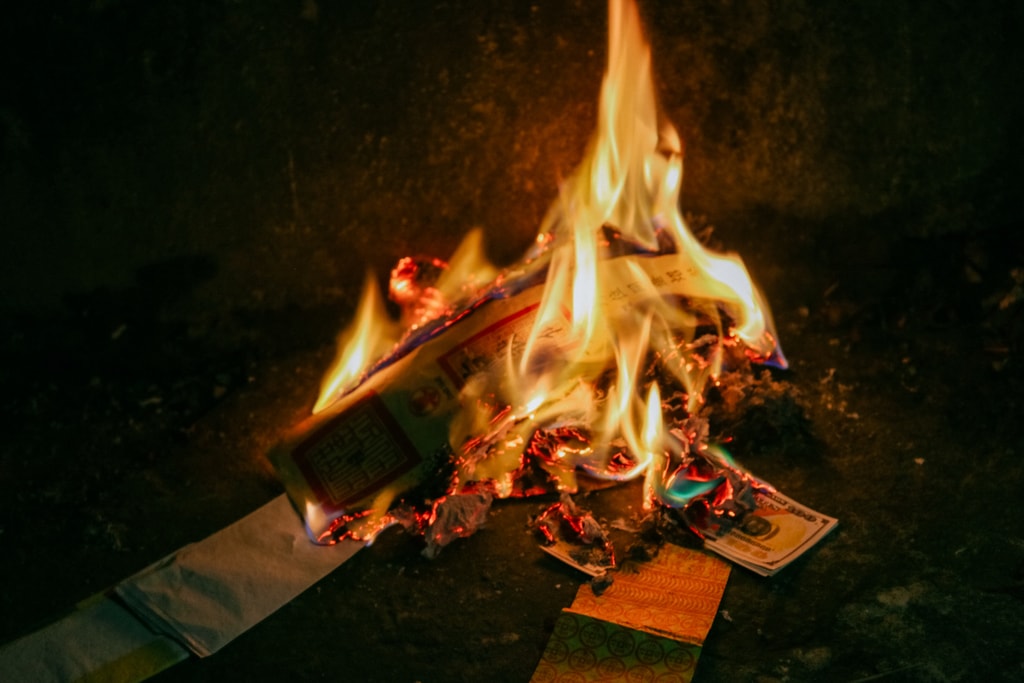 The paper money is believed to be deposited in an afterlife bank of sorts, from which the deceased spirits can make withdrawals. The ritual is said to be derived from a mix of regional folklore and Taoism. The practice of ancestor worship is largely religious, stemming from the fact that the spirits of the deceased are still interested in the affairs of the world. Keeping them happy brings blessings from them for the living. Another explanation for the concept is that the living is allowed to ask spirits to fulfill their wishes, for which they are indebted. This debt cannot be entirely cleared off while alive, so the ghost money sent after death is used to repay whatever they owe the spirits.

1.3 The uses of ghost money in Vietnam

The offering of food serves to bring our ancestors and other beings in the other world closer to us. It serves as a bonding tool to bring both worlds together. This can be seen in cultures all around the world where feasts, dinners, and other social events use money to bring the community together. Spirit money on the other hand serves to separate the living world from the world of ghosts, gods, and ancestors. It is not natural to have both of these worlds in close connection with each other. The use of spirit money is very similar to how we use money in our society today. It is generally used as a tool to maintain a certain level of distance between two parties during a transaction. The concepts of food and money correlate directly to the offerings to ghosts, gods, and ancestors. We use food to bring them close to us and money to separate them from us.

Locals in Vietnam celebrate spiritual practices on the first and fifteenth of every month based on the lunar calendar. They burn incense sticks and ghost money at home as offerings to Buddha, gods and the dead. They simply pray for good luck and pay homage to ancestors. Such rituals are also regularly performed at funerals and on the anniversaries of the deaths of family members and relatives throughout the year.

Spirit money is used in many differing activities. For example, the critical role of spirit money is to repay the debts of our ancestors. The spirit of the ancestor must obtain a body and a fate to pursue it karmic course. However, in order for it to do so, it must pay its mystical debt that accumulates over a person’s life. This rationale explains why people burn such large amounts of spirit money at funerals, for no one ever complete succeeds in repaying his celestial debt. His descendants must pay for him. The living person attempts to pay off this debt by praying and making monetary donations to the gods and temples. However, no one pays off their debts entirely while alive, so their remaining family burns spirit money which is transmitted to their deceased family member. The deceased family member uses this money to pay down the remainder of his debt and embarks on his karmic journey.

Vietnamese people have been burning money since they were kids. They throw the money into it a big cylinder, heavy, and made of metal or something like that and put that outside the house and burn the paper money and paper clothes. Inside the house they have the altar where we burn incense, and pray to the dead. T

Book tour with us Hanoi Free Local Tours to have interesting experience in Hanoi!